“I dig my toes into the sand;
The ocean looks like a thousand diamonds,
strewn across a blue blanket…”
– Incubus, Wish You Were Here

Dawn on Tahunanui Back Beach. At this hour, the beach is empty: a strand of grey sand adorned with a tide-wrack of driftwood. Off to the west, the heaped blue hills of Able Tasman National Park crouch in a purple and mauve haze. The ocean is mirror calm, and slides up onto the sand with a low, sibilant hiss. Offshore, a sailboat, hull down on the horizon, makes its way north on the tremulous breeze; a container ship, like a floating, angular city, makes its approach to the Port of Nelson.

I walk east along the beach towards the rising sun. The sand is cool beneath my bare feet. The receding tide has left an archipelago of tiny, wet-sand islands. Terns and gulls take momentary possession of these new lands then flee, crying, at my approach. The upper limb of the sun clears the horizon and golden light floods across Tasman Bay.

At the end of the beach I cross State Highway 6 and climb the two hundred and sixty-nine steps to Queen’s Road Reserve.

Nelson is a city of light. Situated at the top end of the South Island, the city receives two thousand four hundred hours of sunshine annually, making it one of New Zealand’s sunniest places. “The Naples of the Southern Hemisphere” proclaimed one early chronicler, in reference to its sunny location. Established in 1841, Nelson is the country’s second oldest city. Its founder, Arthur Wakefield, named it after Horatio Nelson, the famed naval commander who won the Battle of Trafalgar during the Napoleonic War.

Many of the city’s streets and public places commemorate people and actions from Trafalgar.

At the end of the beach I cross State Highway 6 and climb the two hundred and sixty-nine steps to Queen’s Road Reserve. From the park’s observation platform I have an uninterrupted view of the vast, pale expanse of the bay. The long narrow isthmus known as the Boulder Bank, its end hooked like a shepherd’s crook, shelters the waters of Nelson Haven, the city’s long, deep harbour. An exclamation-point lighthouse guards the entrance; a flight of steel cranes stand waiting up at the port.

It is mid-January, high summer in Nelson. My family and I are staying in a rented house a few minutes’ walk from the beach. Arriving the previous day – a hot, windy Friday – we had unloaded our stuff and headed straight for the sea. The water of Tasman Bay is shallow, and warms to the temperature of a bath. We swam in the gently toppling waves then lay on the sand to dry out. Later, we’d walked across the road to Sands Fish and Chips for a post-swim snack, ably assisted by some of the local gulls.

Every Saturday morning, the Nelson Farmers Market cranks into life in Montgomery Square, right in the centre of town.  The market is the usual collection of meretricious jewellery, organic produce, gimcrack souvenirs and dubious works of local art, mixed with coffee, food stalls and a few buskers. At the end of one row of stalls, AJ Hickling is playing an upright piano he salvaged from a rubbish dump. Dressed in a chunky hand-knitted poncho, dreadlocks hanging down over his tanned, tattooed shoulders, he is a 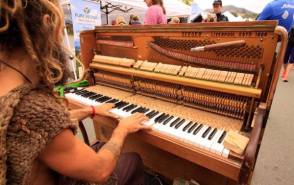 virtuoso player and I watch, captivated, for an hour. Money cascades into his tin; tourists, including myself, upload videos and pictures to social media in real-time.

Tiring of the crowds, I walk up Trafalgar Street and climb the flight of wide marble steps, inlaid into a low hill,  to Nelson Cathedral. Inside, the sound of the city fades to a murmur. An organist plays Bach on the organ in the chancel.  The organ’s two thousand, five hundred pipes fill the interior with their rich, melodious tones. In the east transept, beneath a rose window of red and azure stained glass, concentric rings of candles burn in a circular candelabra.  Sprigs of laurel and roses adorn the pews. Tourists wave selfie sticks, like latter-day censers, around in the nave. Later, back down on Trafalgar Street, I sit at a pavement café table watching the world go by over the rim of my latte glass.

On a hill near the eastern edge of Nelson lies the Geographical Centre of New Zealand. Well, almost. These things are never a certainty. The actual geographical centre is located in “a patch of unremarkable, dense scrub” in the Spooners Range, thirty-two kilometres south-west of town. Nevertheless, the notion of being in the centre of the country is appealing, so I climb Botanical Hill, as it is known, early one morning.

The trail leads from a grassy park, where a man is flying a remote-controlled helicopter, up through groves of rhododendron and native trees. A stainless steel monument atop the hill commemorates the point from which the first geodetic survey of New Zealand was begun in the 1870s. From this three hundred and sixty-degree viewpoint, the “zero-zero” points in neighbouring survey districts (including the just-visible North Island) could be triangulated.

Early on Sunday morning, I sit in YAZA! Café watching thunderous rain fall from a murderous sky. The wind thrusts random patterns of ripples across the pools of rainwater lying on the black asphalt of the empty car-park outside; a few desultory tourists drag their wheeled suitcases through the tempest. The café door creaks in the wind like a schooner under sail.

I leave the shelter of the café and walk down to the marina.  The storm has thrashed the waters of The Haven into a grey mess.  Moored yachts, which yesterday lay on a flat silver mirror, ride out the heavy weather, battened down.  The wind sings in the rigging; halliards and down-hauls tap rhythmically against the swaying forest of masts.  The rain runs in torrents from the scuppers.

By mid-afternoon, the storm has abated.  Rents appear in the cloud-base, and in the high teal sky, a ghost moon, its bottom shorn off, floats hesitantly, as if blown out of the night and into the day.  On Trafalgar Street, the storm has left a tide-wrack of coloured petals, shaken from the baskets of pansies and geraniums swaying on the verandahs.

The Maitai River emerges from a narrow rent in the hills on the eastern edge of the city.  On a weekday morning, armed with a latte from the Pomeroy’s Coffee trailer, which opens early beneath a giant fig tree at the top end of Trafalgar Street, I drive into the valley as the sun is just touching the ridgetops.  Beyond the picnic sites, campgrounds and scattered clusters of houses, the valley narrows to a deep, wooded canyon. The river curls in a serpentine torrent beneath cliffs festooned with dripping native bush. Above the river, pine forests, planted in deft, symmetrical rows and draped with skeins of mist, rise vertiginously to the skyline.  In places, waterfalls tumble from the green heights, shatter on the grey rock next to the road, then roar through culverts to spill into the river.

Each turn of the road, now hemmed between the racing river and the valley walls, reveals a new vista of shadow and shade.  It seems as if the road might go on forever. But a text message tells me breakfast is soon to be served out on the deck so I turn around on a tiny hem of grass and return to the beach.

The ocherous gleam of the setting sun paints the sky crimson and orange, as night comes down on another day in the city of light.

On our last evening in Nelson I walk down to Tahunanui Beach at dusk. A pathway of 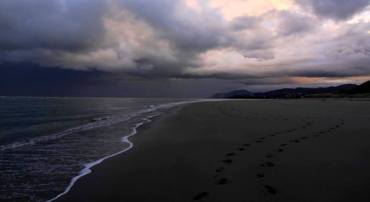 hardwood beams leads through a forest of kanuka and broadleaf growing on the dunes. Flights of sparrows flit amongst the tall grasses, feeding on the bounty of their seeds. Across the bay, the ranges are draped with livid, bruised storm-clouds, lit from within by flash-gun flares of wildfire.

Another storm is forecast and even now, a few heavy raindrops are being blown out of the west.  The incoming tide roars on the shoals and over-falls of the inlet. Gulls hover expertly on the gusting wind.  A few tourists, their phone screens framing the sunset, line the water’s edge. The ocherous gleam of the setting sun paints the sky crimson and orange, as night comes down on another day in the city of light.

Travel Writer and Photographer based in the village of Geraldine on New Zealand's beautiful South Island. View all posts by FERG